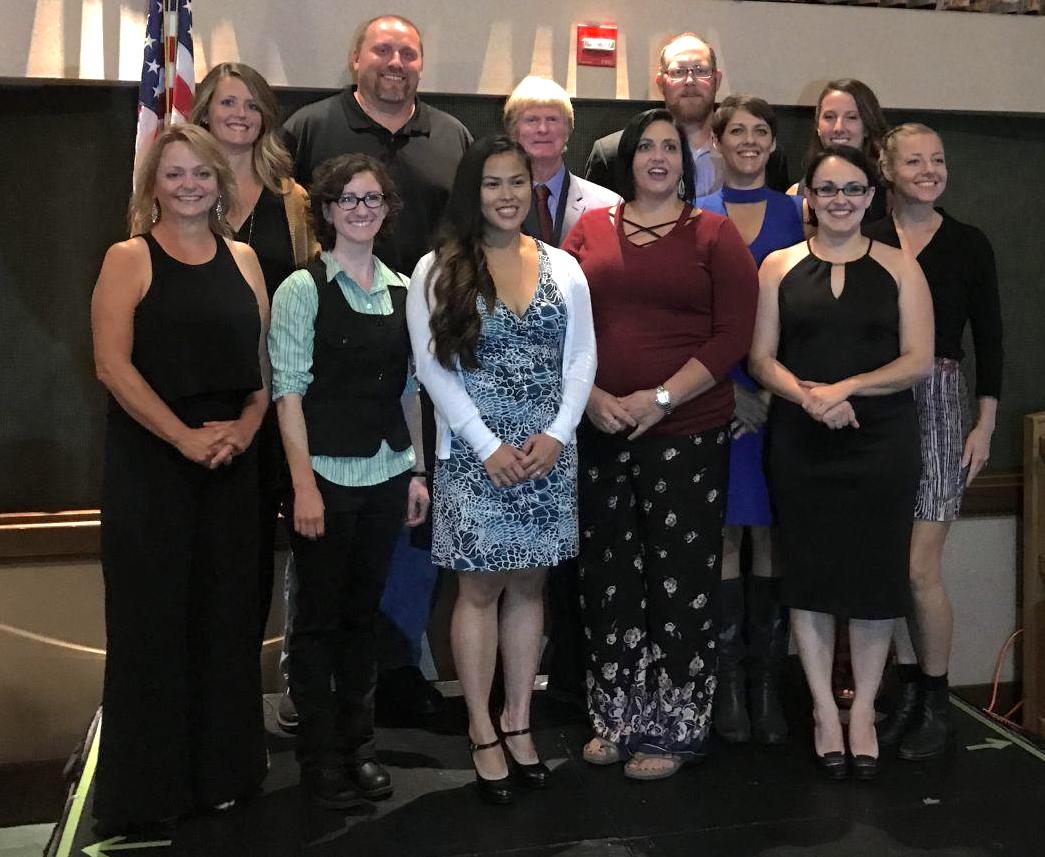 The individual athletes inducted into Marshfield’s Hall of Fame over the weekend went on to be standouts in college as well, but they said they treasured their roots growing up on the South Coast, something they continue to value now that they live in other areas.
Marty Popp, Jason Baker, Mike Belisle and Alison (Worthen) Booth were honored Saturday night, along with the 2002 state champion cheer team and the late Kenn Hess, a sportswriter for decades on the South Coast and later in the Portland area.
​
Marty Popp '69
​
Marshfield was a powerhouse in nearly every sport in the late 1960s, said Popp, a 1969 graduate who was a stellar football and basketball player, as well as track standout.
“We entered into a culture of winning,” he said of the athletes as they became high schoolers. “There was an expectation of that.
“Our coaches were World War II and Korean War veterans. They exuded a confidence they instilled in us. They had a motto: When the going gets tough, the tough get going. That’s how we lived.”
Popp was an honorable mention all-American in basketball at Marshfield and the MVP of the Shrine Game as quarterback before playing basketball at Southern Oregon State College and going on to a career as a teacher in the Portland area.

Baker also went into teaching, in the Roseburg area, which he said would have surprised his teachers at Marshfield, where he wasn’t necessarily a top student.
He was a senior on the 1992 state champion football team, and didn’t take much credit despite being an all-state lineman and future All-American at Montana.
“I was just along for the ride,” said Baker, who credited the genetics that made him 6 foot, 6 inches tall for his high school success. “There were other people who worked harder. I was lucky to be this size.”
He didn’t remember much from the championship game, but has always treasured the trip home from Eugene that night.
“When we got to the North Bend bridge, there was a car every five feet to the high school (supporting us),” he said. “What happened in this town when we won that championship was phenomenal. To do something in this town and for this town that hadn’t been done in a long time is huge.”
In addition to his success at Montana, he nearly made the final roster for the Jacksonville Jaguars before ultimately becoming a teacher. But he values his time in Coos Bay.
“I wish the kids in this town know how fortunate they are,” Baker said. “There’s nothing like this anywhere.”

Belisle, who is now an attorney in Portland, was a Parade All-American at Marshfield with the distinction of being the first interior lineman to win Midwestern League MVP honors during a four-year span that never saw Marshfield lose a regular-season game.
Like Baker, the 1998 graduate credited the people around him — his teachers, coaches and teammates — who built off the success of the 1992 champion squad.
“In the end of the day, I was just a kid from Empire,” he said. “I got to be who I was because of the people who helped me along the way.”
Belisle also was a stellar student both at Marshfield and when he was a player at the University of Oregon, but said sports was an invaluable part of that education.
“I learned a lot being here,” he said. “I learned a little about football. I learned a lot about being a man and a father and a citizen.”

Booth, who graduated in 2008, is the youngest member of the Marshfield Hall of Fame, but also one of the most decorated.
The three-sport star for the Pirates in volleyball, basketball and track and field, was a seven-time state champion in track before going on to be an All-American and national champion at Seattle-Pacific University.
One of her biggest highlights was Marshfield winning the state title her freshman year, when she competed with her older sister, Leah, while their mom, Fran, was the head coach.
“We had worked so hard,” she said. “Whatever we did, we gave 100 percent. To share that with my family (was special).”
Booth taught for a couple of years in the Bay Area before moving to Colorado, and like the others said she treasures her time here.
“What I carry on is things I’ve learned from people who taught me and supported me,” she said.

The state champion cheer team shared the characteristics of Marshfield’s other state champion sports teams, said Ellen Lyon, who coached the squad.
“It was very special,” she said of the group, which attended a camp together in the summer and extended that commitment through the fall and winter until the state championships, winning every competition along the way.
“They didn’t question one another. They had complete faith in what they were doing. They had a goal. They knew how many times you had to practice and they practiced once more.”
The group included Joy Agner, Yvonne Gallardo, Monica (Scholey) Kelly, Courtney (Bergstrom) Wehner, Kayla (Lawrence) Tersigni, Cheryl (Smith) Kline, Mellisa (Duregla) Franklin, Marcella Meyers, Dani Thompson and Tye Vossler, who was a freshman and didn’t compete at the state championships, opting instead to compete in the gymnastics state championships, something she said she regrets.
Seven of the 10 women made it back for the ceremony, along with Lyon, who now lives in Texas, and they spoke fondly of how close the team was and how hard the squad worked.
“It was very much the sense of camaraderie,” said Kline. “That’s something that went with me after high school.”
“That was our life back in high school,” added Wehner. “That was our world. Now we’re married and some of us have kids. It was really meaningful and important that we got to do it together.”

Hess, who graduated from North Bend High School, now has been inducted into both the North Bend and Marshfield halls of fame for his long career in writing, which included nearly 16 years at The World (called the Coos Bay Times when he started).
He wrote sports history books on both Bay Area schools and was known as a sports historian.
Marshfield athletic director Greg Mulkey said a niece of Hess wanted the group to know how proud he would have been to receive the honor.
Saturday’s class was the 16th inducted into Marshfield’s hall of fame. People interested in nominating others for the honor should contact the school’s athletic department.