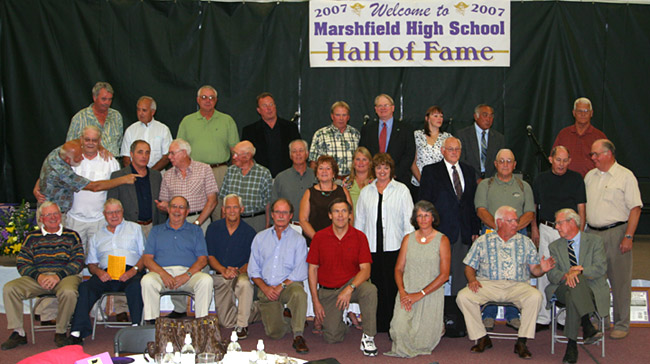 Past and current inductees
2007 Recipients: Andy (Thompson) Crouse, Lou Leberti, Enest Manders, M.D., Butch Shields, Stan Solomon, Kent Wigle,
1955 State Championship Football Team
​Andy (Thompson) Crouse: Thompson, a 1985 graduate of Marshfield, was a three-sport standout for the Pirates, with her best sport volleyball. She played on three district champion teams for the Pirates, earning district co-most valuable player honors her senior year while helping the Pirates place third at state. She was first-team all-league and second-team all-state as a junior and senior. In track and field, Thompson ranks in Marshfield’s top 10 in the 100, 200 and 400 meters, as well as both relays. Her senior year, she joined Jill Schultz, Julia Worthen and Julie Goodrich on a team that set the 4x100-meter state meet 4x100-meter relay record while tying Churchill for first place with a time of 48.51 seconds. Marshfield finished third in the team race. Thompson also played on Marshfield’s varsity basketball team for three years.

She went on to play for two NCAA Division-II national champion teams at Portland state, as a defensive specialist her freshman year and setter her senior season. She has twice been inducted into the Portland State Hall of Fame. Andy married former Marshfield basketball player Randy Crouse in 1991 and they have two daughters, Mady and Mylee. Andy is a teacher in the Tigard-Tualatin School District and coaches her daughter’s volleyball teams.

Lou Leberti: Leberti, a 1965 Marshfield graduate, was honored for his role as an ongoing booster for the Pirates. As a student at Marshfield, he played on the football and basketball teams. Following high school, he served three years in the U.S. Army before returning to the South Coast. In 1984, Leberti and his wife, Kathie, also a Marshfield graduate, purchased Camco, a vending company now known as Vend West Services. Leberti’s long support for South Coast youth started in the 1980s, when he volunteered to coach basketball through the Jaycee program at Milner Crest Elementary School when the Coos Bay School District cut physical education, athletics and activities from its elementary school budget. He was an active volunteer and donor for SWOYA, which became the Boys & Girls Club of Southwestern Oregon. When his daughters, Kim and Tammie, entered Marshfield High School, Leberti became an active member of the Marshfield Booster Club, serving as a board member for 15 years. He was instrumental in keeping athletics going when the program was zero funded by the school district for the 1988-1989 school year and was responsible for starting the popular Meet the Pirates Night program. Outside of his involvement in schools, he also is an active member of the Coos Bay Lions Club and was part of the team that successfully lobbied the Oregon School Activities Association for Marshfield to host the Class 3A state wrestling tournament in the 1990s. He also is part of several other community groups and boards. His daughter, Tammie (Leberti) Montiel is Marshfield’s volleyball coach, while her husband, Floyd, coaches the softball team.

Ernest Manders, M.D.: Dr. Manders, who graduated from Marshfield in 1963, was a standout football player for the Pirates, but has made his name since high school in academics. He was an all-state football player as a junior and senior and was selected to play in the Shrine Game his senior year. He also was editor of the Mahiscan and a National Merit Scholar. He also met his wife, Sandra (Burles) Manders at Marshfield.

After graduating from Marshfield, Manders received his undergraduate education at Harvard College and then attended Harvard Medical School. After a surgical internship at the University of Michigan, he worked for two years as a research associate in the Laboratory of Viral Oncology at the National Institutes of Health. He returned to the University of Michigan, where he completed his training in general surgery and plastic surgery, joined the faculty at Penn State University in 1981 and has been a professor of surgery at the University of Pittsburgh since 1977. He is a member of seven national surgery or plastic surgery groups, including the American College of Surgeons and American Society of Plastic and Reconstructive Surgeons. His methods for reconstructing the scalp with tissue expansion and his designs for tissue expanders used to reconstruct breasts after mastectomies have become standard for use around the world.

Away from school, Manders was a Scout master for 12 years and received the Silver Beaver, the highest honor for adult leaders in Boy Scouts. Ernest and Sandra Manders have four children, Ernie, Jonathan, Christian and Joanna, who all graduated in the top three of their high school classes and went on to receive Ivy League educations.

Butch Shields: Shields, a 1965 Marshfield graduate, played varsity basketball and football for three years for Marshfield before becoming an active member of the Marshfield Booster Club. Shields studied at Southwestern Oregon Community College and Oregon State University before returning to Coos Bay to start his family and his career. Shields and his wife, Jacque, also a 1965 graduate, have two sons, Troy and Todd, who graduated from Marshfield. Shields started working for Coos Trucking Co., which later became Gold Coast Truck Repair. He now owns that company.

Shields served as a board member for the Marshfield Booster Club for more than 20 years and still is an active member. He joined Lou Leberti in keeping sports alive when Marshfield dropped funding for the athletic program in the 1988-89 school year. Through his company, Shields helps keep Marshfield’s athletic vehicles running properly and decorated in Marshfield purple and gold at no cost to the school district. Gold Coast Truck Repair also sponsors many activities at Marshfield. Shields joined the board of directors for Southwestern Oregon Youth Activities when that organization was formed in 1985 after the school district dropped funding for elementary school athletics. Shields also was a founding member for the Boys & Girls Club of Southwestern Oregon, the successor for SWOYA. He started and chaired an auction that has raised more than $1 million for the two organizations.

He also was a founding board member for the Bay Area Sportsman’s Association, which raises money to support wildlife and youth activities in the Bay Area. He currently is on the fundraising committee for the Barview Area Charleston Area Parks Association’s baseball fields project. He has received several awards for his support for the community’s youth, including the Judge Richard Barron Award in 1992 for exceptional contributions to Coos County Youth and in 2000 for significantly enhancing the lives of at-risk youth. Shields also is an Eagle Scout and served as a Scout master for several years when his sons were growing up. He also was involved in the Bay Area Jaycees.

Stan Solomon: Solomon was honored for a long history of coaching in the Coos Bay School District that continues more than 40 years after his arrival in the community. Solomon was a 1957 graduate of McKinley High School in Honolulu, where he was most valuable player of Hawaii’s East-West Coaches Football Game.

​That fall, he was hired at Charleston Elementary School to teach physical education for fifth through eighth grades and coach the eighth-grade football, basketball and track teams. In 1964, he moved on to coach the same sports at the new Millicoma Junior High School. He became a teacher at Marshfield High School in 1966 and continued at the school until retiring in 1994. He was an assistant football coach from 1966 to 1996 and was the defensive coordinator on the 1992 state champion team. He also was head girls basketball coach from 1977 to 1989, with eight winning seasons. The 1979-80 team won the consolation title at the state tournament and finished with a 24-5 record. The 1988-89 team reached the state tournament. Solomon was an assistant coach at Marshfield from 1966 to 1972 and then the head coach until 1996, including the 1983 girls team that placed third at the state meet. He has been an assistant coach since 1997 and has directly coached 12 individual state champions, including five pole vaulters in the last decade. (Willamette University Hall of Fame)
(Note added 2009:  Sadly, Solly passed away suddenly on January 16th, 2009.  Four months later, Moriah Roberge set the state high school championship pole vault record for 4A-5A-6A competition at 12' 9 1/2".)

Kent Wigle: Wigle has made his mark at Marshfield as football coach, where he is entering his 20th season at the helm of the Pirates. A 1965 graduate of Riddle High School, Wigle went on to play football and baseball from Southern Oregon State College (now Southern Oregon University). He earned a bachelor’s degree at Southern Oregon in 1970 and a master’s degree in 1975 from the University of Oregon.

His teaching and coaching career started at South Umpqua High School in 1970. He coached football and baseball at South Umpqua. His baseball teams won two state titles and finished second three times, while his football squads were champions or co-champions three times and runners-up once.

Wigle came to Marshfield as head coach in 1988 and has put together a 164-48 record. His teams have reached the state playoff 17 of 19 seasons, including a state title in 1992 and a runner-up finish in 1994. His overall football total of 298 wins ranks second in Oregon history. Wigle has been named Midwestern League Coach of the Year seven times and his teams from 1994 to 2000 won 55 straight league games, a Class 4A (now 5A) state record. He was the Oregon Football Coach of the Year in 1992 and the Western Region Coach of the Year in 1996. His greatest coaching recognition came when he was named the 2005 National Coach of the Year by the National Federation of State High School Athletic Associations.

​Wigle and his wife, Susan, have been married since 1975. In addition to his coaching work, he served nine years as a member of the Coos Country Club Board, including three years as president. He has been a member of the Oregon Coaches Association for 37 years, served 12 years as an OSAA basketball official, has been a Lions Club member for 25 years and was a fundraising spokesman for the Boy Scouts for three years.

1955 State Champion football team: The squad beat Gresham 19-0 in the state title game and was the second of three straight Marshfield teams to win or share the state championship. The head coach was Pete Susick, and his assistants were Chet Haliski, Tony Koreiva, Walt Paczesniak and Dean Sheldon. The team finished the season 11-0 and beat Medford and Washington in the playoffs before topping Gresham. The team only gave up 47 points all season and had five shutouts. Its closest game was its 20-6 win over Medford in the playoff opener.