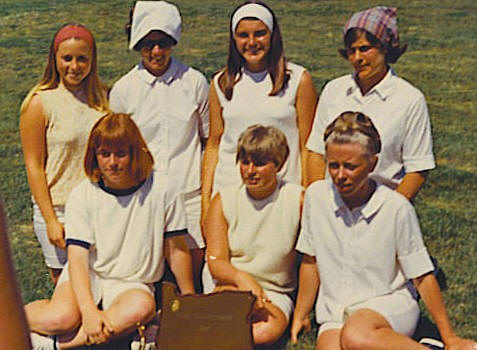 .....By 1967, tennis had taken it's grip on a number of Marshfield ladies who practiced diligently long after their regular practice hours were over.  The extended practice sessions paid off as the Pirates took 1st place in singles (Mary Paczesniak) and 1st (Janie Chiene and Peggy Eddy), 2nd (twins Anne and Angie Guenther), and 3rd (Carol Hanson and Kathy Krummel) place in doubles at the District Tournament.  With Paczesniak advancing into the semi-finals in singles and Chiene and Eddy advancing into the semi-finals in doubles at the State Tournament, the 1967 Marshfield girls' tennis team tied with perennial tennis powerhouse Roseburg as State High School Co-Champions, becoming the first girls' State Championship team in Pirate history.