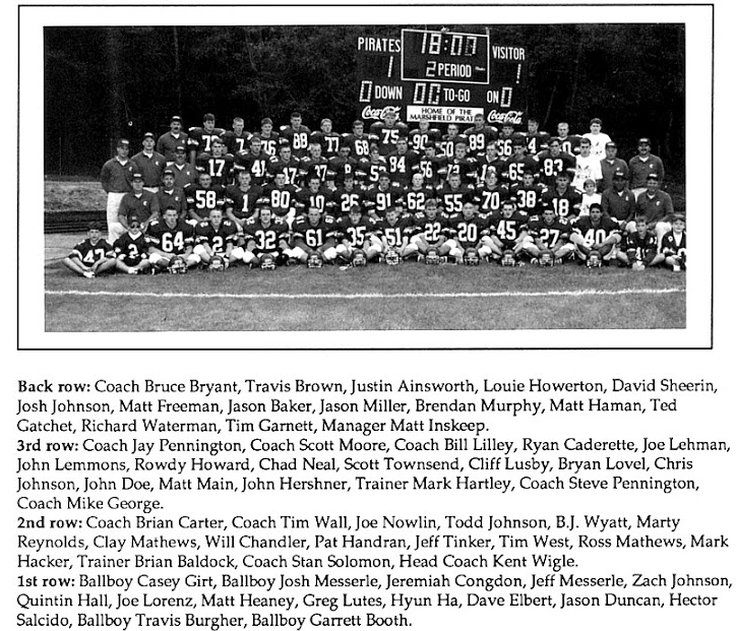 The 1992 State Championship Football Team
Clayton Smith: The 1957 graduate was the quarterback for Marshfield’s 1955 and 1956 state champion football teams and also the 1956 state doubles champion with Steve Langenberg in tennis before playing both baseball and tennis for Oregon State University. He served 22 years in the U.S. Air Force, retiring in 1984 as a lieutenant colonel.

Gary Rossi: The 1959 graduate was a three-sport star for the Pirates. He was an honorable mention all-state running back in 1958 and was part of the 1956 state champion team, shared the high jump state title in 1958, and played basketball for the Pirates and later Oregon State University, where he was part of the Beavers’ 1963 Final Four team. He also was the first president of Marshfield’s Key Club.

Bill Counce: The 1969 graduate won state swimming titles in both the 50-yard freestyle and 100-yard backstroke his senior year and earned a swimming scholarship to the University of Oregon. He spent 34 years working for Industrial Steel and Supply before recently retiring.

Gene Webb: The 1980 graduate was state wrestling champion for the Pirates at 191 pounds his senior year and also an all-state selection on both offense and defense in football. He played in the Shriner’s North-South All-Star football game and was Marshfield’s citizen athlete of the year. He went on to wrestle for Oregon State University, where he won a Pac-10 title.

Stephanie (Wessell) Kelly: The 1986 graduate was state champion in the 3,000 meters for the Pirates and also placed third at the state cross country meet before becoming an All-American for the University of Oregon, where she won two Pac-10 titles in the 10,000 and one in the 5,000 and helped the Ducks to one Pac-10 title in track and field and two in cross country.

The 1992 State Champion Football Team: The Pirates finished the regular season with an 8-1 mark before  rolling through the playoffs with wins over Newberg (33-0), Bend (19-6), South Medford (32-7) and Tigard (14-6), leading up to a 36-21 win over Ashland in the championship game at Autzen Stadium. The Head coach was Kent Wigle and his assistants were Bruce Bryant, Brian Carter, Chuck Crandall, Mike George, John Johnson, Bill Lilley, Scott Moore, Greg Mulkey, Jay Pennington, Steve Pennington, Stan Solomon, Wayne Van Burger and Tim Wall.