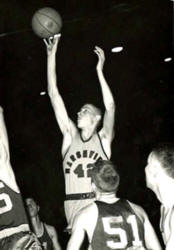 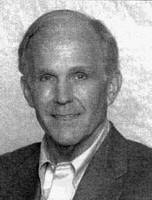 ​Kent graduated from Marshfield in 1964. He won Marshfield's first-ever state high school wrestling championship title that year at 141 pounds. Kent was a three-year letterman, two-time district 5A-1 champion and state high school AAU runner-up in 1964. Kent matriculated to Princeton University on an academic scholarship. He wrestled on the varsity team his sophomore year. Kent received his B.S.E. in Aerospace and Mechanical Sciences in 1968.     Upon graduation, Kent was commissioned as a second lieutenant in the U. S. Marine Corps. In 1969, he married the former Linda R. Smith, MHS '66. He served three years on active duty in the U. S. and Asia, and remained in the active reserve until 1983 when he retired with the rank of major.
Following his discharge from the Marines, Kent entered the Haas School of Business at the University of California, Berkeley. He was elected to Beta Gamma Sigma and Beta Alpha Psi, national business and accounting honor societies. He graduated in 1973 with his Master of Business Administration. In 1976, Kent earned his certified public accounting certificate.
Kent's 35 year business career has encompassed a wide variety of domestic and international industries including banking, mining, retailing, outsourcing and educational publishing. He has served in executive positions including corporate treasurer, chief financial officer, president and company director. Kent has worked in public and private companies with revenues ranging from a few million dollars to several billion dollars. While trying to figure out what "retirement" means, he remains a partner in The Interlochen Group, a corporate finance consulting firm.
Active in professional and civic organizations, Kent is a past director of the National Association of National Treasurers, served on The Conference Board's CFO Council and is past president Financial Executive International's Birmingham, AL chapter.
Kent has been involved with the Boy Scouts of America since growing up in Coos Bay where he earned his Eagle Scout badge. He was an assistant scoutmaster in his son's troop, served on the Atlanta Area Council's Executive Board for ten years and is now on its Advisory Board. Through his Trout Unlimited Chapter, Kent conducts fly-fishing merit badge clinics for Scouts.
Kent and his wife of 39 years, Linda, have two children, Ben and Alison. Linda is retired from Marriott International. Ben is a mechanical engineer with Newcomb & Boyd, a consulting and engineering design firm. Ben and his wife, Cinnamon, live in Atlanta. Alison is a deputy public defender for Orange County, CA. Kent and Linda reside in Atlanta.

Traveled extensively in Europe, North Africa in 1972-73
Received M.S. from University of Oregon in Biology.
Traveled extensively in Europe, USA and Mexico; worked in California, 1974 to 1978.
Received M.B.A. from the Amos Tuck School of Business, Dartmouth College, 1980.
Worked for a variety of high technology companies in California from 1980 to 1983.
Established Effective Marketing Associates, a consultancy, in 1983.
Married Cindy L. White, Albany, Oregon in 1987.
Moved back to Oregon in December 1989; reside in West Linn, OR since 1990.
Moved family to Spain for a year, June 2002 to July 2003, so the kids could learn Spanish, understand a different culture and make new sets of friends
After graduating from college Stephen earned a couple of graduate degrees before settling down in California, where he met and married his wife, Cindy (born and raised in Albany, OR). He lived in California until1989, then moved back to West Linn, Oregon.
He has two children, Prescott, 19; and Madison, 17. Prescott is also a wrestler and is an Oregon State Champion and a multiple-time top 5 placer at National Championship tournaments. He currently attends the US Naval Academy. Madison is a senior in high school this year and speaks 2 foreign languages. This summer she spent 3 weeks in Italy beginning her third foreign language. She is considering a career in early education and psychology.
Stephen and Cindy still live in West Linn with Madison and their dog, Shea. They enjoy traveling and after the 30th reunion, they went to the Sydney Olympics, Cambodia, Hong Kong, Raratonga, New Zealand, Tasmania, and Thailand. In 2002, wanting the kids to learn a foreign language, the family moved to Spain for a year. Stephen is in the 25th year of running his management consultancy. Life is good, work is fun, kids are nearly grown, a new phase is about to begin, and traveling will increase. 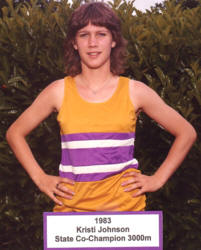 Education:Career Highlights:
Attending the same high school as legendary Steve Prefontaine inspired her to go out for the track team. She had run times of 4:43.2 (1500) and 10:07.7 (3000) as a prep and tied for the state 3000 title as a senior. She was a five-time All-America pick in NAIA cross country and track. After college, she took a few years off and moved to Eugene, where she started training again. Mike Manley [1969 national champ in steeple] was a big influence.     Kristy earned a degree in English and now teaches full-time, seventh and eighth grade language arts at Martinsburg South Middle School. She was coached by Chris Fox, whom she married on December 28, 1998. Fox is a former top-flight distance runner (13:21.60 for 5000, 2:13:43 for the marathon); now 40, he is competing on the masters circuit. They work well together and train together quite often.
Regarding the future, she says, "I still think I can run faster. In my heart and my head I have a 2:27. 1 think I can do it. I'm going to keep going as long as it takes or until I fall apart."
ATHLETIC ACCOMPLISHMENTS:COACHING ACCOMPLISHMENTS:EMPLOYMENT: 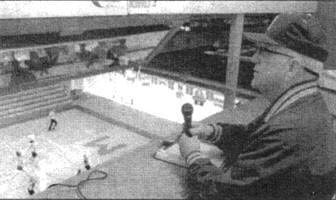 ​Sports announcer Ed Keim always had one of the best seats in the house at the Marshfield Lady Pirates home basketball games. From the wooden booth high above the gymnasium floor, he kept his eyes on the game from the jump ball until the end of the fourth quarter. His soft, energy-filled voice fed the fans' imagination through KMHS 1420 AM with his shot-by-shot account of the girls in action. Ed was joined by two friends and co-announcers Ron Nance and Steve Walker. The trio worked together scribbling down game statistics and announcing girls basketball, and boys baseball. Keim enjoyed announcing the girls basketball games because they gave out as much effort as the boys teams, but did not always receive the recognition they deserved.

Keim graduated from radio school in 1950 after his discharge from the Army in Dallas. His first job was at KTXJ in Jasper, Texas in 1950. He did many things at the station, but wanted most to be a sports announcer. The position was held by the station's general manager. Ed tagged along with him, begging to do the sports, and finally one day, he got to do a couple of plays at a baseball game and then went on to do a couple of innings.     Keim soon moved to a station in Louisiana and began announcing baseball. He had "exaggerated" his experience, but when it came time to start, he just started talking. Later, he couldn't remember what he said, but the station loved it.
Later, he moved to California and Idaho before arriving in the Coos Bay area at KOOS radio. In the early 1970s the station was sold and he decided to go into real estate and then on to mortgage brokerage.
When asked if girls basketball was his favorite sport to announce, he said, "I love them all. They are all my favorites for different reasons and they all have a special place in my heart."

Don Megale was one of Marshfield High School's all-time tennis stars. He was at Marshfield from 1944 to 1948. He dominated Coos County High School Tennis, leading the Pirates to 3 undefeated seasons.

In 1954, he was selected to the United States Air Force Tennis Team. He later coached basketball and tennis at Klamath Union High School. His 1958 basketball and tennis teams won State Championships.
​
Don went on to become the head tennis coach at Oregon State University. He is a USTA Nationally ranked Senior Tennis player.  In 2001, he was ranked #3 in Doubles, and #14 in Singles. He is now retired, but is still playing Senior Tennis. He resides in Corvallis, Oregon. 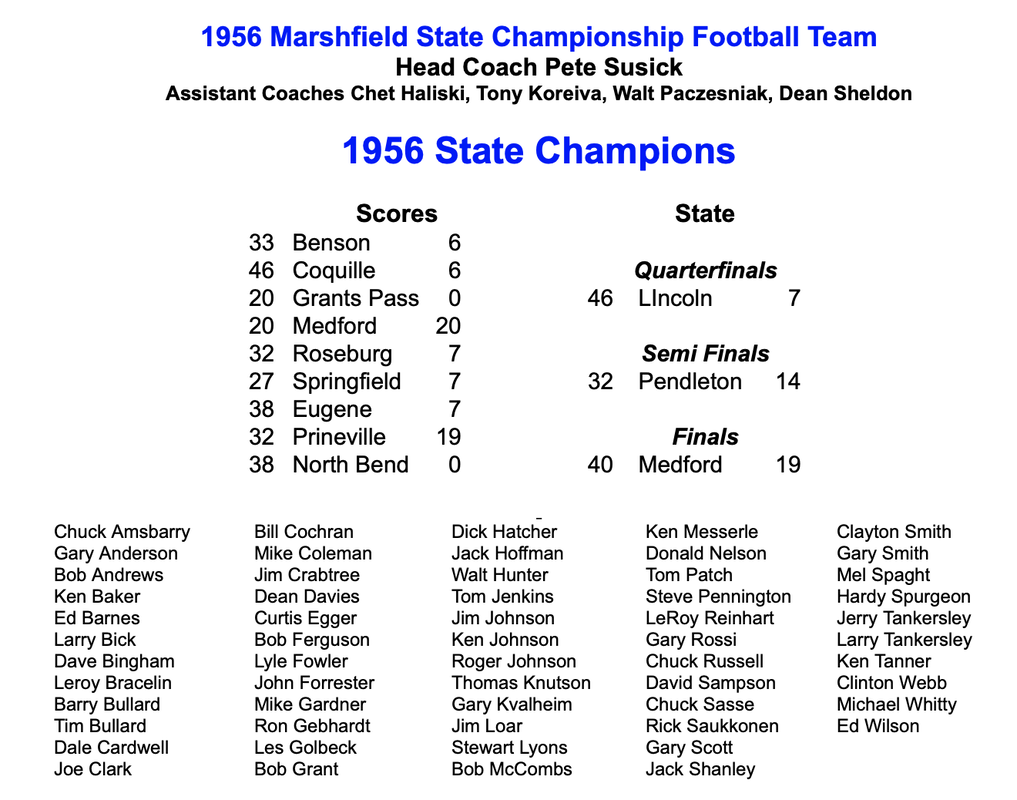